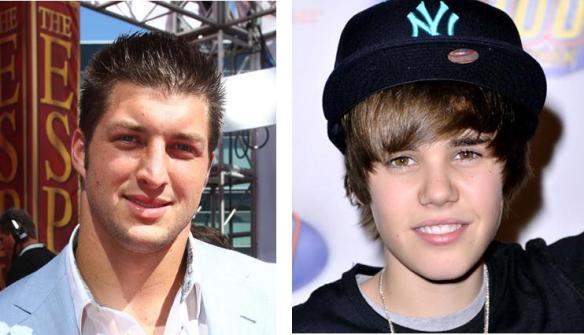 Mr. Popularity: What do these two have in common? Apparently, a lot more than I possibly imagined.

Well, after declaring false prophecy last week when I picked Pittsburgh to dispose of Tim Tebow and the Broncos, I was not expecting to be blindsided by a tsunami of unparalleled hype. However, when I read the news Thursday morning that an ESPN poll rates Tim Tebow as the most popular athlete in the U.S., I — apparently unlike a lot of people — experienced acute disgust at yet another Tebow headline. But this was far worse. As Charles Barkley so eloquently states, this is more than just turrible, it’s a national nightmare.

After my stomach had settled down somewhat from rage-induced vomiting, I became perplexed at how all of this is even possible. Then a “light bulb moment” struck me. I realized that Americans, as a whole, have the absolute worst taste in just about everything imaginable. We are a nation that loves the taste of McDonald’s. We lap up sequel after sequel of horrible movies faster than Hollywood can rip them off and spew them out. Almost half of us voted George W. Bush into office in 2000 and more than half re-elected the buffoon to a second term.

Perhaps our greatest detriment as a society at large is an unfounded infatuation with pre-pubescent bubble gum pop music. That’s when it hit me. I realized that Tim Tebow is the Justin Bieber of sports.

This realization did not settle my stomach any, but it has allowed me to make sense of the Tebow phenomenon unlike anything else before.