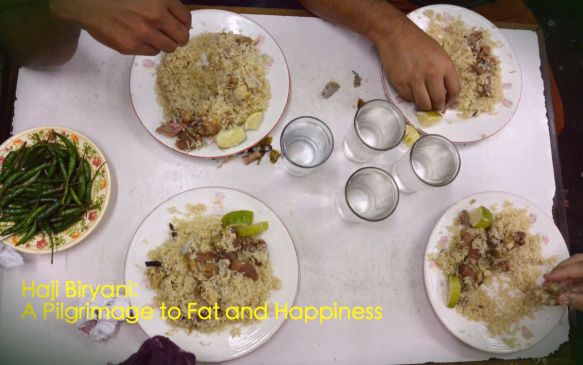 Biryani is an age-old dish believed to have been created in the kitchens of Mughal emperors, who demanded only the finest food throughout their empire be gathered and combined into a single dish fit for the Almighty himself. Consisting of fine-grain rice, chopped beef, chicken or goat, and cooked with refined butter and a dash of aromatic spices, the beauty of biryani lies in its simplicity–its greasy, delicious, rib-sticking simplicity.

Tucked away on a narrow, crowded byway in Old Dhaka lies a hidden gem of culinary delight called Haji Biryani. Haji Biryani is perhaps the most famous of all biryani houses in all of Dhaka and sat atop the list of my personal to-do list upon arriving to Bangladesh back in April. After many weeks of procrastination, I finally acted on visions of manifest destiny and set out on my own personal hajj to partake in the heralded mutton biryani served up by the city’s oldest such restaurant.

True to its name, traveling to Haji Biryani requires one to depart on a harrowing journey not unlike the annual Muslim hajj to the sacred center of the Islamic world in Mecca. Getting to the restaurant itself will test your faith, mettle, and force you to overcome physical torment of hunger, claustrophobic crowds and hellacious traffic jams. Could I possibly survive the gauntlet standing between me and the coveted biryani without melting down?

For us, we began the journey southward on Mirpur Road, braving Tourrette syndrome-inducing traffic jams on a rain-soaked afternoon in the relative comfort of our Mitsubishi Pajero. I wasn’t keeping time, but I am certain we were sitting in idle far longer than we were actually in motion, which swiftly eroded my patience and shook my faith in the torture-to-reward ratio in determining whether anything was worth this trouble. Even mutton biryani.

Throughout the drive down to Old Dhaka, I had to constantly reassure myself that the pot of gold at the end of this discordant rainbow would make the journey worthwhile. This notion was really put to the test when my wife suggested that we stop at Banga Bazar — one of Dhaka’s busiest clothing markets and thus one of my least favorite places in the city. Rather than accompany her through the crowded stalls of shirts, pants, fabric, lungis, saris, sandals, trinkets, and tea stands, I opted to remain in the vehicle with my daughter. There, we endured the pleas of beggars, stares of passers-by, and a standstill traffic flow while the ol’ lady and our two friends braved the bazar — much more preferable than watching somebody else shop whilst on an empty stomach.

Fat and happy: The intended result from visiting Haji Biryani. Sadly, I am too ‘fat’ to fit into a standard Bangladesh men’s large t-shirt or I would have been ever so ‘happy’ to purchase and wear this shirt to Haji Biryani.

Despite the overall annoyance of shopping in general, the stop was successful. More importantly, my wife had witnessed a sign that we were still on the path of biryani enlightenment — this shirt: (photo, right). My soul smiled at its truth, wisdom, and significance, providing enough energy to see me through to the end of the journey.

The Promised Land at Last

In 1939, Haji Mohammed Hossain opened the doors to his namesake restaurant, providing  customers the finest of mutton biryani in the entire land. More than 70 years later, loyal patrons enter the small crowded space to inhale the famous dish in the same manner as generations before, leaving with the satisfaction of an overfilled stomach and minimal damage to the pocketbook.

After exiting the vehicle, we traveled the final stretch of our trek by foot. The congested alleyway presented us with a maze of rickshaws, pedestrians, domesticated animals, manure, and open sewer ditches as a final test of faith. Thanks to our friends, they guided us to Haji Biryani — a place virtually indistinguishable to other storefronts and unrecognizable to anybody who didn’t know its exact location. Having no signboard outside the small concrete structure, I would have walked right past otherwise.

How was it? In a word: freaking scrum-diddly-umptious. And filling. But it’s not a post-Thanksgiving-uncomfortable-gut-exploding satisfaction; Haji Biryani’s mutton biryani provides the diner with a swift yet calm satiation as you wash hunks of goat meat down your gullet with lumps of rice coated with grease to help it settle smoothly. The bed of rice transferred from the plate to the stomach also lightens the load of red meat one is able to eat. And, as with all Bangladeshi food, you must eat it with your hand, so it inherently tastes a little sweeter than other food you have to eat with crude metal utensils.

What makes the dish special is the the unique combination of cardamom, cinnamon, cloves, and a special ingredient — mustard oil — giving the dish a nice balance of savory and hints of sweetness. More importantly, Haji Biryani does not skimp on the amount of tender juicy mutton in their recipe, pleasing carnivores young and old with a healthy dose of vitamin M. There are also numerous shards of bone clinging to the pieces of meat. This was not an exercise in delicate cuisine but a bona fide, bone-shattering cleaving of meat to expedite the process of fulfilling appetites as fast as possible.

Haji Biryani prepares and serves its only dish from a single gigantic, piping-hot pot. Once the rice and meat is gone, it is gone until the next day. I also appreciate the fact that there is only one menu item in the entire joint, negating the need to even have a menu to begin with (whoa…existential, man). Why ruin a good thing with unnecessary appetizers, desserts, vegetarian options, or other frills and distractions from the holy grail of mutton, rice, oil and spice? Rhetorical question.

Though it requires a substantial investment in time, motivation and nerves, I highly recommend making the trek to Haji Biryani and taste the treasure yourself.

You may not be fat, but you will surely find happiness.