Many fans, including myself, are awakening from the typical slumber-inducing NBA regular season.

Many people mark April 15th on their calendars as a reminder to pay their income tax. It is also a day for large U.S. corporations to celebrate another victory over common man and revel in the fact that they will pay Uncle Sam jack squat as they realize $10 billion in profits (GE did just that in 2010). With these troubling disparities, all we have as working class slobs is the solace that only April can offer: relatively half-decent weather in which to drown our sorrows, a new Major League Baseball season, and the beginning of the actual NBA season — the playoffs.

Over the next couple of weeks, we will look at key playoff series — should they actually exist — and combine our efforts and energy so that we might actually survive the brutal eight-week trek to the NBA Finals. But first…

Regular Season Round Up
If you have not been following professional basketball up until the playoffs, fear not. You missed nothing. The 2010-2011 campaign offered few surprises other than Chicago Bulls point guard Derrick Rose and his meteoric rise to a chorus of overwhelming harmony in the likely unanimous vote for Rose as regular season MVP.

There was surprise in Utah, however, where the wishes of a fragmented Utah Jazz fanbase materialized in all forms during 2010-11. They ran Carlos Boozer out of town immediately following last year and Boozer now finds himself amidst a championship run with Chicago. Those who were jaded with Jerry Sloan and his 20-plus years reign as head coach had their call answered when the great Sloan, presumably fed up with today’s pampered athletes and a stubborn Deron Williams, retired before the All Star Break. To top it off, the Jazz lost the player that ran Coach Sloan out of town — Deron Williams, who was until then, the face of the Utah Jazz.  In essence, a lose-lose-lose in Salt Lake City.

People may attempt to qualify the Carmelo Anthony trade to New York as surprising; I file it under “who cares” (much the same way fans in Denver have).

Now, none of that matters. However, as lengthy and predictable as the regular season was, you can expect more of the same in the playoffs. Especially the length.

Only the NBA and NHL boast playoff systems that span the course of at least two full months. They are also similar in that less and less people actually watch — or care — what happens. Apathy aside, here is one reason to watch…

You probably ask why this is number one on the list. It is number one on my list of reasons to watch. Torn between my lifelong support of the Lakers, I must admit that part of me would enjoy seeing my once-hometown Hornets and Chris Paul, my favorite NBA player, and Trevor Ariza, my former favorite Laker, derail the Lakers’ hopes of achieving history.

“Historic, a Lakers championship would most definitely be.” — Yoda

Phil Jackson looks to become the only coach ever to win four separate “three-peats;” Kobe Bryant is vying for his sixth NBA title to tie him with his idol, Michael Jordan (nobody seems to mention — yet — that this would push him past Magic Johnson in the ring count); and sideshow clown Ron Artest is in search of another championship ring to shamelessly hock on eBay.

All of these are noble aspirations. However, it would be equally satisfying to see these dreams vanish into thin air at the hands of CP3 and a New Orleans franchise on the brink of certain death, in the form of relocation or contraction. A first round knockout of L.A. could save the New Orleans Hornets in one fell swoop. For this reason, I hope the Hornets pull off the upset. The city of New Orleans needs the Hornets.

What to watch for in this series: 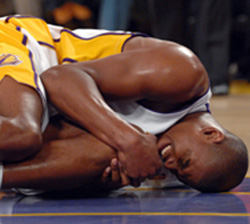 An all-too-familiar scene for Lakers fans, the health of Andrew Bynum will determine whether L.A. takes home a third consecutive title.

Hornets will win Game 3, but ultimately, the Bees are just too overmatched by the size and length of L.A. The Lakers will probably suffer bouts of lethargy, as they have all year, but will ultimately prevail and continue the march toward the NBA Finals.

Other NBA Pointless (but correct) Predictions: