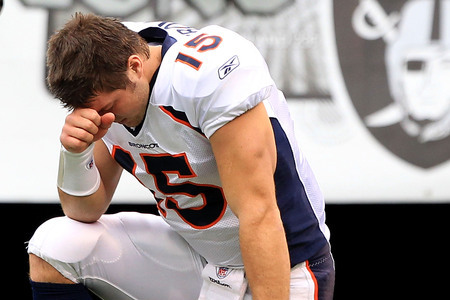 "Forgive them, for they know not what they do." Tim Tebow, worshipped as a false idol in Denver and across the country, prays for the salvation of his followers...and a victory over Pittsburgh on the Sabbath.

Predicting winners in the NFL Playoffs is much like picking the winner of a Presidential Election. With the start of the Republican primary campaigns polluting television screens across America, we are inundated with numbers from the latest popularity polls and so-called expert opinion, only to witness these prognostications rendered meaningless when final results roll in and evaporate the fanfare. As in life, so as in football.

However, unlike politics, the opinions of your everyday American slob actually bear weight in the landscape of our country’s rich culture and tradition. We can also take solace in knowing that one cannot lobby or simply buy their way to victory as we experience each election cycle, but that wins can only be gained—and manifest—on the actual field (except in college football). With that, I present my keen insight and clairvoyance in picking the winners for Wild Card Weekend.

As always, this is not the place where we examine statistical breakdowns or X’s and O’s. No, my friends, this is a genuine, red-blooded American blog where we need no facts to form opinion and no numbers to prove we’re right. We create our own logic and rationale based on gut feeling and inexplicable bias.

Might as well get the worst matchup out of the way first, so here goes. This game is probably best described as the “Who Knows? Bowl.” Here’s why:

The answers? We don’t know. And, like the game itself, those of us residing outside of Cincinnati and Houston probably don’t care. The winner gets either Baltimore or New England, so the season will end soon enough for both teams but even sooner for the Bengals and running back Cedric Benson, who will have plenty of time to get his motorboat ready for another offseason booze cruise. 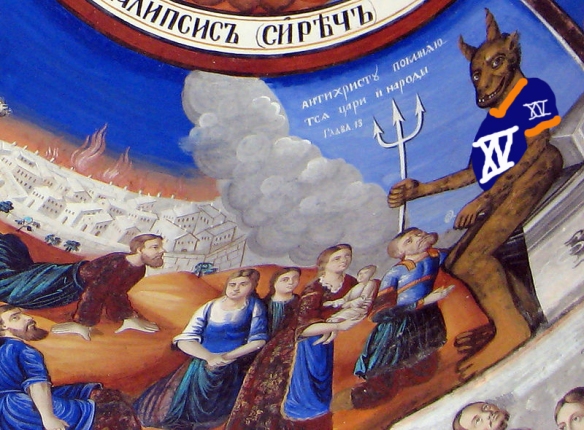 An ancient fresco found in a Macedonian monastery depicts the Antichrist deftly presiding over his minions of dull-minded admirers. Legend has it that the Roman numeral XV holds particular favor to the Deceiver, which coincidentally, is Tim Tebow's jersey number (15).

They say the Antichrist is a leader who will resemble Jesus Christ himself, provide for the needs of the people, yet perform counterfeit miracles and signs and ultimately deny salvation to mankind. There is no better example of this fabled demon than what Tim Tebow represents to Denver Broncos fans. Foolish enough to believe in the positive-attitude, noodle-arm southpaw, faithful disciples in Denver heap praise upon Tebow as if he were actually the Son of God—or John Elway.

Well, the trickery and deception will end this coming Sabbath when the hobbling Steelers of Pittsburgh ascend upon the Mile High City and rightly prove the prophecy of Timothy as utter folly. Ben Roethlisberger, an infamous sinner himself, will prevail over The Exalted One, in what will probably be an underwhelming contest on the field.

In what promises to be the most entertaining game of Wild Card Weekend, the Saints play host to the Detroit Lions for a clash of high-octane offenses…and defensive squads who, between the both of them, have more holes than a Michael Bay plotline (not sure how many times that’s been written, but still merits use). Having just come off a horrendously pathetic showing against Green Bay’s practice squad, where they helped backup QB Matt Flynn eclipse his cumulative passing and touchdown totals from his college days at LSU, the Detroit D can ill afford to play like pussycats once again.

On the other side, New Orleans is one of the toughest teams to beat on their home turf. With the Carnival season officially underway and an entire day to consume copious amounts of alcohol before the 7:00pm kickoff (a full 12 hours for some folks), Saints fans will undoubtedly be in a raucous mood on Saturday night. Their role as the drunken, boisterous 12th Man will help the New Orleans defense just enough to keep the Lions out of sync and help propel Drew Brees and this offensive juggernaut to victory. However, the hangover will ensue as the 12th Man wakes on Sunday and rues the day New Orleans lost on the road to the lowly St. Louis Rams earlier this season, making this their only Superdome appearance in the 2012 NFL Playoffs.

The early afternoon game on Sunday will offer viewers more clichés than anything else. We will hear about the inability of Atlanta’s offense to perform outside of the friendly confines of a domed environment, as well as visions of Tom Coughlin looking like a high school science teacher pissed off at students throwing spitwads from the back of the room—both aptly suggested by our friends at sportsattitudes.com.

Beyond that, I’m predicting more cliché. Matt Ryan will adequately lead the Falcons’ charge on offense, without much help from Michael Turner but assistance from New York Giant penalties, and have a small lead going into the fourth quarter. Eli Manning will orchestrate one of his league-leading fourth quarter comebacks and regain the lead for the G-Men. Falcons will strike back with a score, given up partially by poor coverage but mostly because of a stupid Giants penalty—or three, and command the lead once again. Manning will have just over a minute to lead the Giants to victory. He’ll start the drive out with three completions down-field. Then, the Overlooked Son of Archie will throw an interception and the Giants lose. The organization will stand pat during the offseason, maybe lose another wide receiver, and we’ll see Tom Coughlin back roaming the sidelines with Eli Manning at the helm, piloting the team to another mediocre finish in a mediocre division.